Welcome back to The Colour Out Of Space Opera, a blog post series on the uses of colour and style in many familiar space opera series! Here are the catch-up links if you need them: one two three four five six

The last two installments focused on the use of colour in Blake’s 7, to colour-code the heroes for quick characterisation, and also to show characterisation arcs. This time, let’s turn back to Battlestar Galactica, Blake’s 7‘s near-contemporary.

One particular use of colour in 1970s Battlestar Galactica is the use of white as a shorthand for villainy. This appears to start as a sly political dig. The series itself generally followed a strongly neoconservative line, to the effect that politicians are untrustworthy, pacifists are naive, and governance is best done by reluctant leaders who swoop in, solve your problems, and go away quickly. In the pilot episode, the Council of Twelve (or Quorum) ruling the Colonies appear dressed in Roman-style white senatorial robes. Naturally, one of the Quorum is a traitor to his species, and the rest are naive idiots who basically let him get away with it: 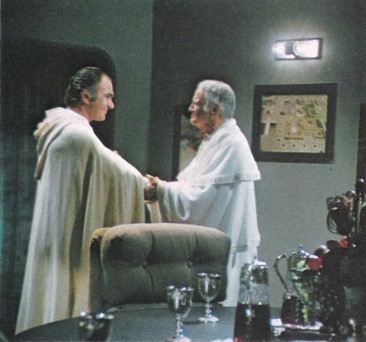 However, there’s another referent. The 1970s saw a renewed dialogue over the history of slavery and its fallout in the USA, so what’s a better shorthand for villainy in a multiethnic neoconservative series than a costume recalling, white-clad, plantation owners: 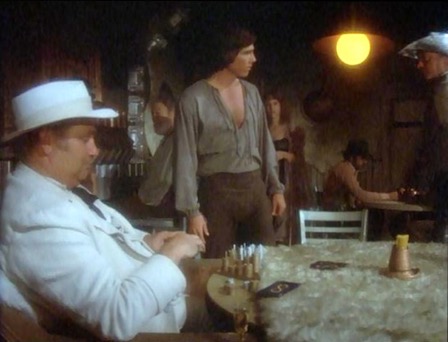 The re-use of this trope also gives us white-clad corrupt politicians (again) in The Gun on Ice Planet Zero, white-helmeted prison guards in The Long Patrol… and this guy. 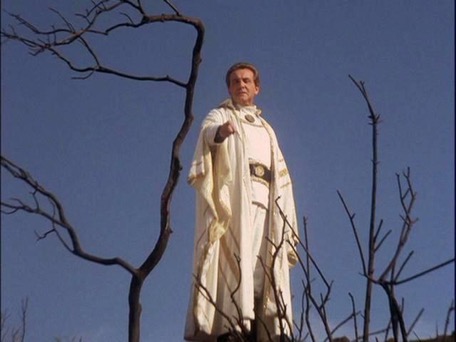 In one of the more interesting, and subtle, uses of this trope, Count Iblis in War of the Gods first appears to the Fleet as a man wearing a uniform not unlike Adama’s, but white. This appears like a way of inspiring trust while also subtly hinting at Iblis’ supernatural, “angelic” nature… but, if you’ve been following the series, also a hint that he’s the anti-Adama, who will potentially lead the Fleet to destruction. And then, in the same story, we meet the Lightship People: 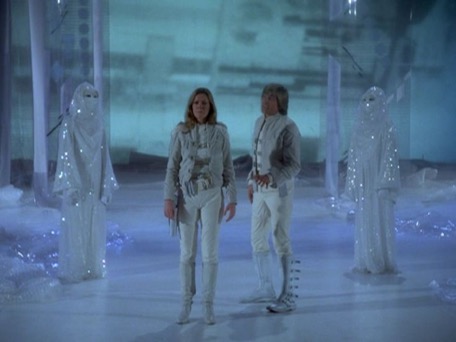 Angelic creatures, also dressed in white. Seemingly benign figures who can even restore the dead– but who are also plainly working to their own agenda and not necessarily the good of the Fleet.

This is echoed later in their implied messenger, “John,” an ambivalent figure who Starbuck and Apollo find less than trustworthy: 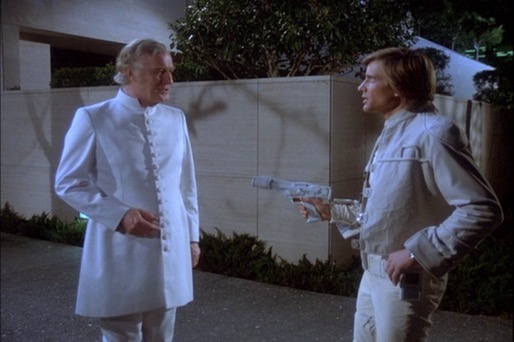 And, while the re-use of the white uniforms in the godawful Galactica 1980 was, on one level, simply a way of saving money, it could also be taken as a sign that something in the series has gone terribly, terribly wrong. 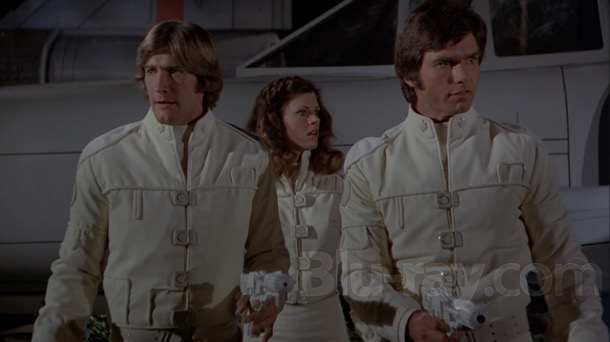 What about the new series? The colour-coding comes in first of all as a way of differentiating individual Cylons, perhaps most obviously in the case of burgundy-Doral and teal-Doral, identified by jacket colour: 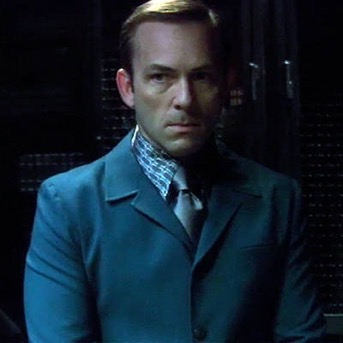 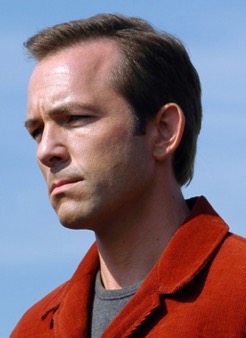 Given that the series sets up a nature/protagonist, culture/antagonist differentiation early on, though, we can also see styles, rather than colour per se, used to set up the opposing characters of Sweet Eight (nature) and Hard Eight (culture) in The Face of the Enemy. 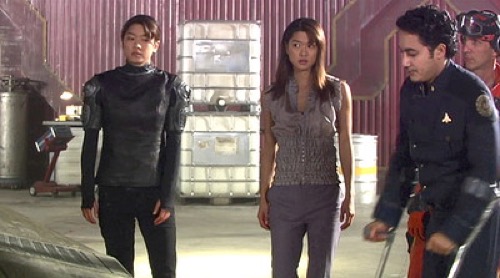 As with Blake’s 7, though, reimagined Battlestar Galactica also uses changes in colour and style to show the journeys of various characters. Leoben, for instance, starts out as a fanatic, obsessed with Starbuck and what he believes to be her spiritual destiny: 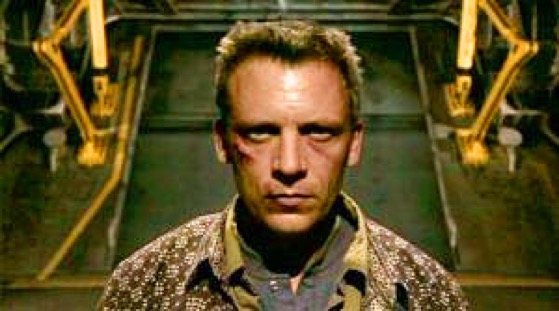 As this obsession leads him into darker, sadder areas, he abandons the rough bright colours and wears black. Significantly this is also true of the Head-Leoben who appears to Starbuck in her visions, symbolising his role in allowing her to come to terms with her destructive nature and her own death: 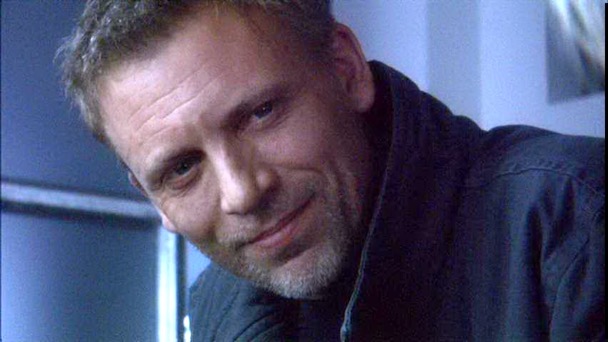 One of the more interesting examples comes with another of the Head People, in this case Head Six who appears to Baltar throughout the story. When she first appears, it’s in a red dress, symbolising her connection to the Cylons but also seduction, destruction and conflict… 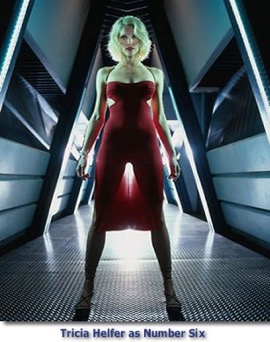 (…as a side point, note that a red dress is also, so to speak, a red flag about the true nature of Ellen Tigh…) 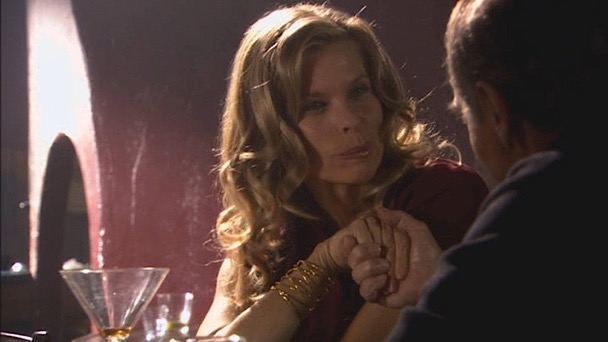 During the Pegasus story arc, though, Head Six dresses in darker colours, as Baltar has to confront and navigate the abuses perpetuated by humans on Cylons (and on each other): 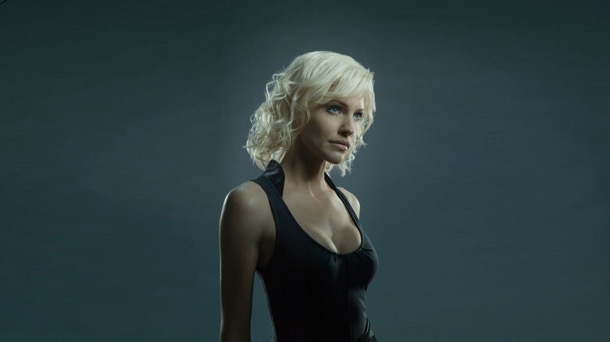 Later, as Baltar becomes a spiritual leader to the Fleet and begins encoding the monotheistic religion that Head Six has been encouraging him towards, she varies her colour scheme somewhat: 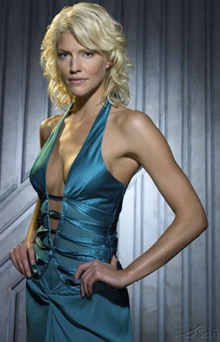 Significantly, when she is most encouraging Baltar towards his spiritual role (at the end of the first season, and later on after Baltar’s cult forms), she dresses in white: 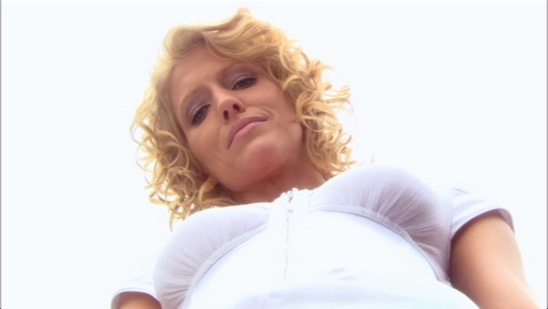 Which, of course, has connotations of spirituality and angelic nature, and weddings, and other positive associations that one might expect.

But let’s not forget: right from the start, a white costume in Battlestar Galactica marks you out as, at least to some degree, a villain.

Next time: a step away from costume and a look at how to differentiate your planets.

3 thoughts on “The Colour Out Of Space Opera Part Seven: White Hat Hackers”