Welcome back to The Colour Out of Space Opera! As promised last time (catch-up links: one two three four five six seven), this episode will take a quick look at the problem of planets.

As we’ve seen extensively, one of the crucial issues in space opera is how to differentiate characters, and ideally give the audience some understanding of who they are and what their role is, in a quick and easy way that can help casual viewers tuning in to the series, while not alienating or boring regulars.

However, another crucial issue is that space operas require characters to visit different planets on a near-weekly basis. Which presents a twofold problem: first, how to make a landscape look convincingly alien on a budget– and, second, how to disguise the fact that the same location usually has to stand in for several planets?

(as an aside, I’d like to stamp very thoroughly on the idea that this is the result of space operas being done on the cheap. This is a problem that affects all space operas, from the genuinely low-budget Blake’s 7 through to original series Battlestar Galactica, at the time the single most expensive TV programme ever made. Because it doesn’t matter if you have the resources of a small multinational corporation, that budget still has limits– and, even if your budget was completley unlimited, physical and logistical considerations also mean your choice of locations is not infinite).

One easy, cheap and effective way of doing this is through lens filters. A simple filming or post-production effect can make a normal Earth landscape look alien, as in Battlestar Galactica‘s War of the Gods:

This particular effect clearly led to problems, as in the same story vis-FX shots including laser beams and the revelation of Count Iblis’ demonic forms were incompatible with it and had to be shot in conventional colours. Nonetheless, for the audience, the planet has been established as alien.

Blake’s 7, on more of a budget, used a red lens filter instead in Time Squad to make the planet look more alien and less Southeast England, without the troublesome vis-FX problem (sometimes simpler is best):

Which is rendered even more effective by the social and emotional connotations of the colour red, giving the adventure a sense of urgency and danger. Similarly, in Cygnus Alpha, the titular planet’s superstitious theocracy is highlighted early on by having the exteriors set in darkness: 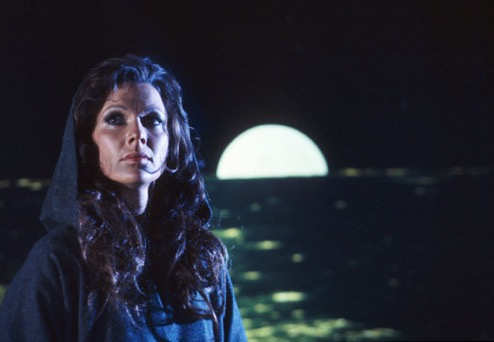 Colour and filtering can also be used to drive the audiences’ emotions regarding the setting more subtly. For instance in the New Caprica story arc of reimagined Battlestar Galactica, the lighting and post-production teams indicate the sense of frustration, monotony and despair associated with the colony and its later occupation by giving it a grey, rainy tone throughout:

But, in the episode Unfinished Business, as characters remember happier days on New Caprica, the planet is seen in unexpectedly brilliant sunshine, reflecting how it can look with the rose-tinted glasses on:

Finally, the Eye of Jupiter story arc shows us how lens filters and visual effects can be used to achieve multiple ends at once. The use of lens filters, first, disguises the fact that the team are filming in Kamloops (handy for Vancouver and nicely rugged) yet again, and sets up a harsh, bleak, washed-out emotional tone reflecting the characters’ increasingly frayed relationships as well as their feelings about the planet:

And, when the revelation in the temple is about to unfold, visual effects can change the sky and the landscape to something more suitably terrifying and apocalyptic:

Next time: A shift back to costuming, and how to get historical referencing right… and hilariously wrong.

One thought on “The Colour Out of Space Opera Part Eight: What Colour Is The Sky On Your Planet?”