Last time, I promised a special bonus blogpost, as it were, on The Mandalorian. This series wears its Western origins on its sleeve: it’s described as a “space Western” in publicity, and openly references Westerns all over the place. However, and here’s the thing: this barely shows up in the design. There’s everything else from the Middle East to Samurai to Athenian helmets in there: but there’s nary a cowboy hat, silver or otherwise, in sight. 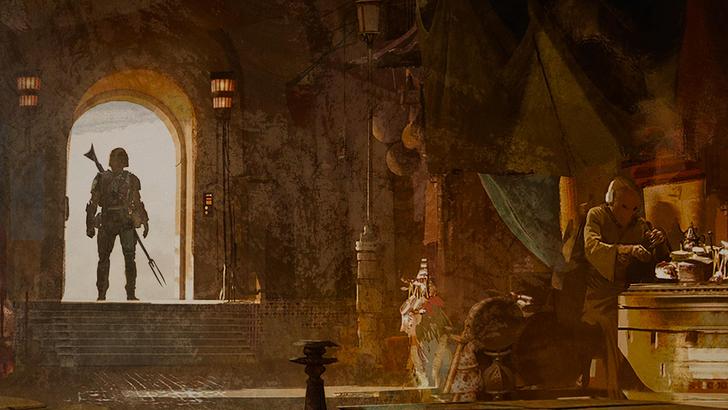 So how do we get our Wild West? Well, for a start, think about the political subtext to Westerns, namely, the USA in the last quarter of the nineteenth century (with The Wild Bunch and similar pushing us into the early twentieth). A country that’s just come out of a brutal civil war, largely over the issue of slavery; a sudden territorial expansion from the edges of the country into the centre of it; with a new federal government that’s physically incapable of closely monitoring everything going on in its territory.

The Mandalorian gives us a Star Wars universe that’s just finished a brutal civil war. While slavery doesn’t appear to have been the driving issue in the middle three movies (and droids never seem to get emancipation, to judge by the last three), the character of Quill in The Mandalorian is a former Imperial indentured servant, and there’s also clear ambivalence about the status of droids (leaving aside the titular character’s racism against them, the pit-droids in “The Gunslinger” seem to be employees of the repair shop rather than slaves, and Zero in “The Prisoner” seems to be an independent agent). There are petty local warlords profiteering, unemployed ex-troopers from both the Imperial and Rebel sides making a living as hired guns, and people from the losing side attempting to start the war over again. The New Republic is in place, but blatantly doesn’t have the resources to keep order. So, in the same way that Kurosawa was able to set up a dialogue between Westerns and Samurai films by exploiting the similarities between the periods, so The Mandalorian works by playing on the similarities between the Wild West and the post-Empire universe.

On top of that, The Mandalorian heavily references familiar tropes from Westerns. The setup, with a single-parent bounty hunter, is close to that of the 1950s TV western The Rifleman, and the driving thread of a morally questionable man who is redeemed through protecting an innocent, in some ways angelic, figure, is from The Wild Bunch. Individual episodes also reference specific Westerns, with “Sanctuary” most obviously being The Magnificent Seven (with aliens, and five gunslingers short of a full set). There’s even a comely widow for the Mandalorian to regretfully leave, and Cara Dune has antecedents in Annie Oakley and Calamity Jane. Even the concept art that runs under the credits doesn’t just look like Ralph Macquarrie’s original concept art for Star Wars, it looks like the sort of artwork that you might see in a 1950s or 1960s pulp Western magazine. So we have a Western that’s symbolic, rather than visual.

Finally, the colours. Getting back to the original subject of this essay series, The Mandalorian does something pretty interesting here. At first, I’d noticed that our hero is very much the triumph of Culture over Nature; not only does he have that sort of cool blue-spectrum colour scheme, he’s literally encased in chrome for the whole story (except for one brief scene, which, under the circumstances, is the exception that proves the rule.– reinforcing my theory that we’re starting to swing back from nature-heroic, technology-evil, to something more the reverse.

However, he’s not the only hero of this series:

The Mandalorian is also completely inseparable from the Baby Yoda: the Mandalorian smith-priestess even declares them a “clan of two”. And Baby Yoda is nature personified: green, dressed in shades of brown, at one with the force and expressing an astounding range of emotions on his tiny face. So what we have, in The Mandalorian, is the merging of nature and culture, to a positive outcome for all.

Next time: I’ll try and sum all of this up and come to some useful conclusions.

Don’t forget, the book bundle is still on sale! Go have a look!

One thought on “The Colour Out of Space Opera Part Twelve: The Good, The Bad and the Baby Yoda”