Surprisingly not bad, though I am wondering a bit about the fact that so far the two best episodes have been ones about emotional abuse.

An illegal immigrant who’s been forced to wrestle in “snuff fights”, which are exactly what the name implies. He escapes but promptly runs foul of the immigration authorities. Brogan intervenes on learning the man’s son is still in the hands of the fight promoters and is being groomed to take his father’s place. Of course Brogan et al. go undercover, bust the operation wide open, save the kid, and persuade the authorities to regularise the pair’s status, while still finding time for Haldane to make jokes about kink (memo to bad guys: if you capture Haldane and Castle, just shoot them, don’t bother tying them up in a storage cupboard). But we’re still in awfully serious territory for SP.

Chief Podly, at one point, goes on a very familiar rant about illegal immigrants Coming Over Here And Taking Our Jobs– and when Brogan points out he and Haldane are immigrants, Podly swings without missing a beat into You’re One Of The Good Ones. Which is believable, but has also got me wondering about the colonial setup of Demeter City.

Is it actually a Creon city? If so, why’s it got an Earth name and why do all the Creons dress in human-style clothes? Is it a Creon city that the humans took over and now everyone’s living in a sort of awkward postcolonial situation, a kind of space Singapore? Is it some kind of human/Tarn/Creon collaborative effort?

As someone who’s very fond of Singapore (I visit there at least once a year for work), I like the idea that it’s a space-age equivalent, but speculating about it gets me into some dark areas: e.g. you can read it so that the Creons parallel the Malay population, the Tarns the Chinese, and the humans the Europeans, and there are occasional hints in the text of Space Precinct (including this episode) that Demeter City, under its facade of happy multiculturalism, has a lot of class and interspecies tensions that spill over into violence, suggests a similar sort of complex colonial history. But this never gets explored in the text.

The B plot this ep has one of the Creon officers having to look after his grandfather, an ex-police-officer with dementia. Although they tried to play it lightly, it still also struck me as believably sad.

The standout experience was undoubtedly Istanbul. On my first day, on my first visit to the city, I was walking around the Blue Mosque around four-thirty and noticing that the lawn outside was filling up with families with picnic cloths and baskets, and a small market of food sellers were stealthily firing up their grills. The moment the call to prayer went out at five, a huge cheer went up and, shortly thereafter, everyone set to work.

Other visits, in Izmir and in Singapore, were rather more low-key, but still entertaining. Singapore is a city of multiple religions and one where everybody loves a party, so Ramadan is a time when it becomes harder than usual to book a restaurant, but it’s even more than usually worth it if you do. Izmir had special holiday bread loaves, fireworks at sundown, and a team of young people who would walk through the streets at 5 AM banging a drum to let everyone know the party was over and it was time to go back to fasting.

The one exception in my experience? Surprisingly, Cairo.

I’d booked a trip deliberately during Ramadan of 2010, based on my positive experiences in other majority-Muslim countries, and Cairo’s reputation as a cosmopolitan, cheerful city.

And the place closed the shutters for Ramadan.

Although it’s tempting to put it down to this being 2010, less than six months before the revolution kicked off, the reaction of local people was that this was normal. Everything shut for Ramadan; this was just what one did.

On the positive side, the Coptic establishments all opened up in the evenings, which led to some very exciting culinary experiences, including the best Hongkongnese food made by a non-Hongkongnese that I’ve ever had, and the discovery that Egypt, one of the inventors of beer nine thousand years ago, has definitely kept up the brewing tradition in the meantime.

But if I get to travel during Ramadan again, I’m going to Istanbul.

I go to Singapore to teach at least once a year, which is good, because I like Singapore. And one of the most amazing things in Singapore is Haw Par Villa. Which, because it largely defies description, I’m going to show you in pictures rather than telling a funny story.

What most people know about Haw Par Villa, if they know anything at all about it, is its famous set of dioramas depicting the Seven Hells of Buddhist folklore. And yes, you certainly can see the damned facing horrible forms of punishment:

Which, apparently, their victims can watch before going on to their own judgment, which seems rather schadenfreude-heavy to me:

But that’s, if anything, the most conventional part of the park. For one thing, the park was set up by the people who invented (or packaged and marketed, anyway) Tiger Balm, and one can occasionally run into the ghosts of Tiger Balm mascots past: 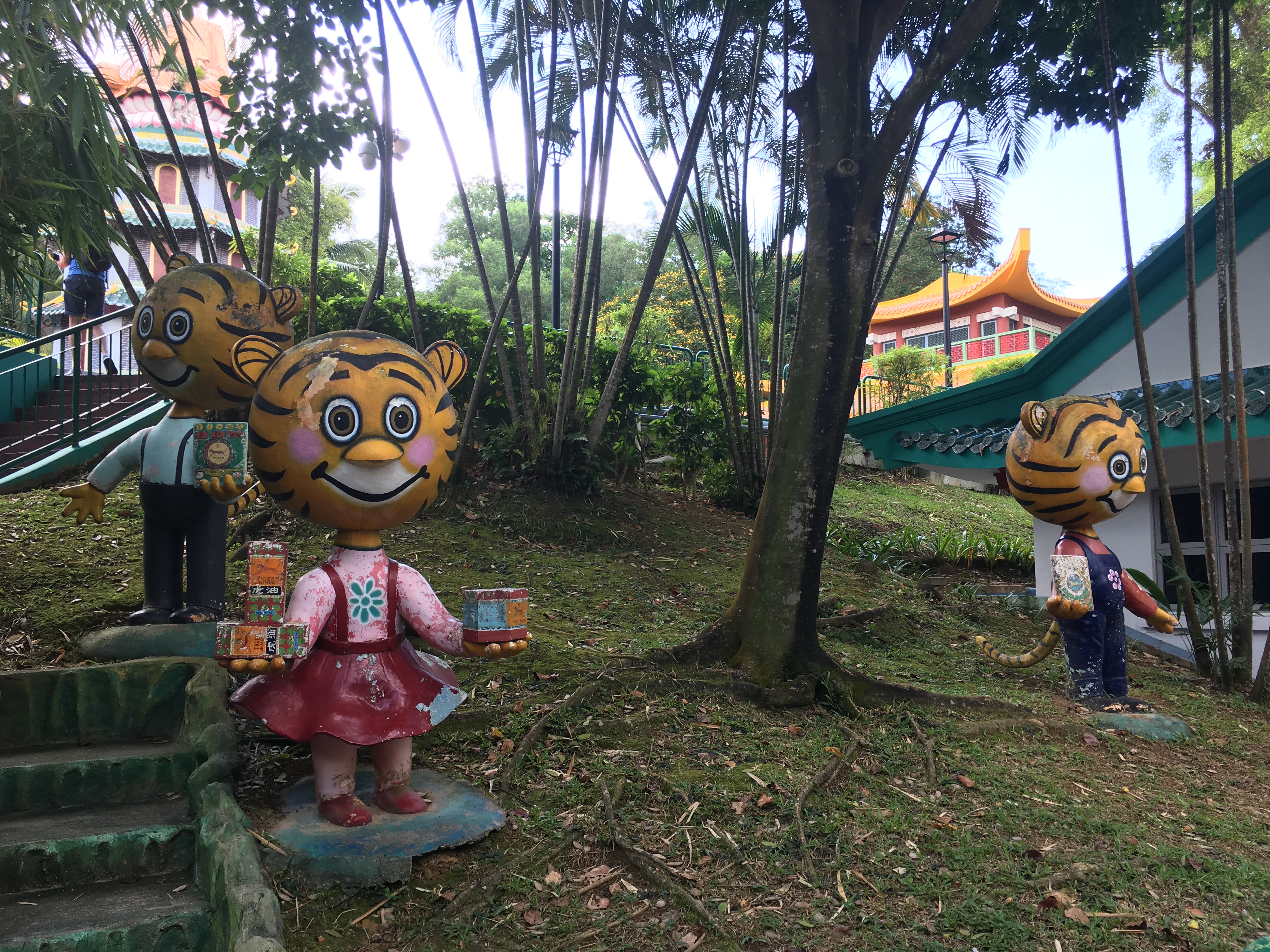 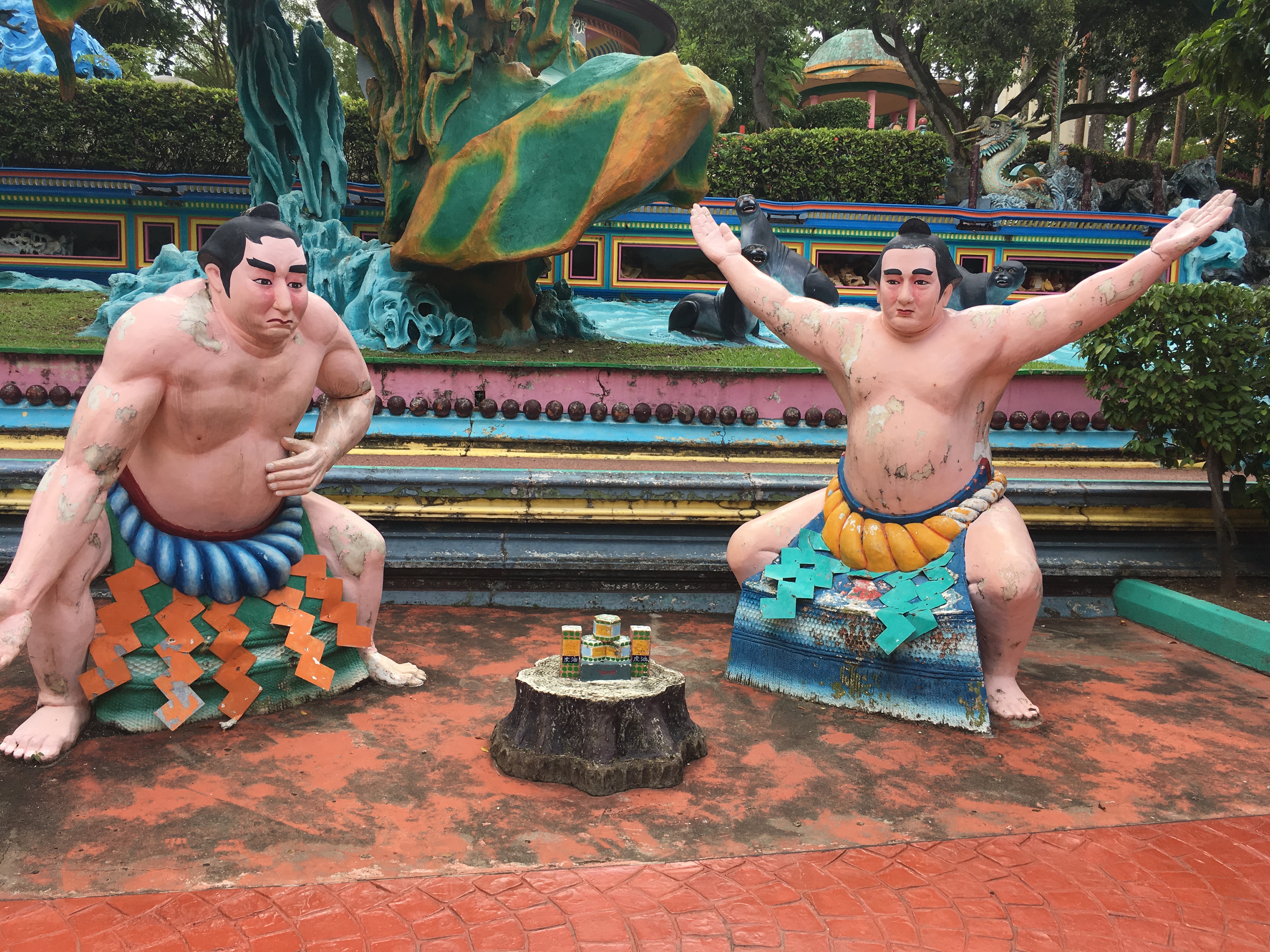 Or a pitched battle between the rats and the rabbits, no, I don’t know either. 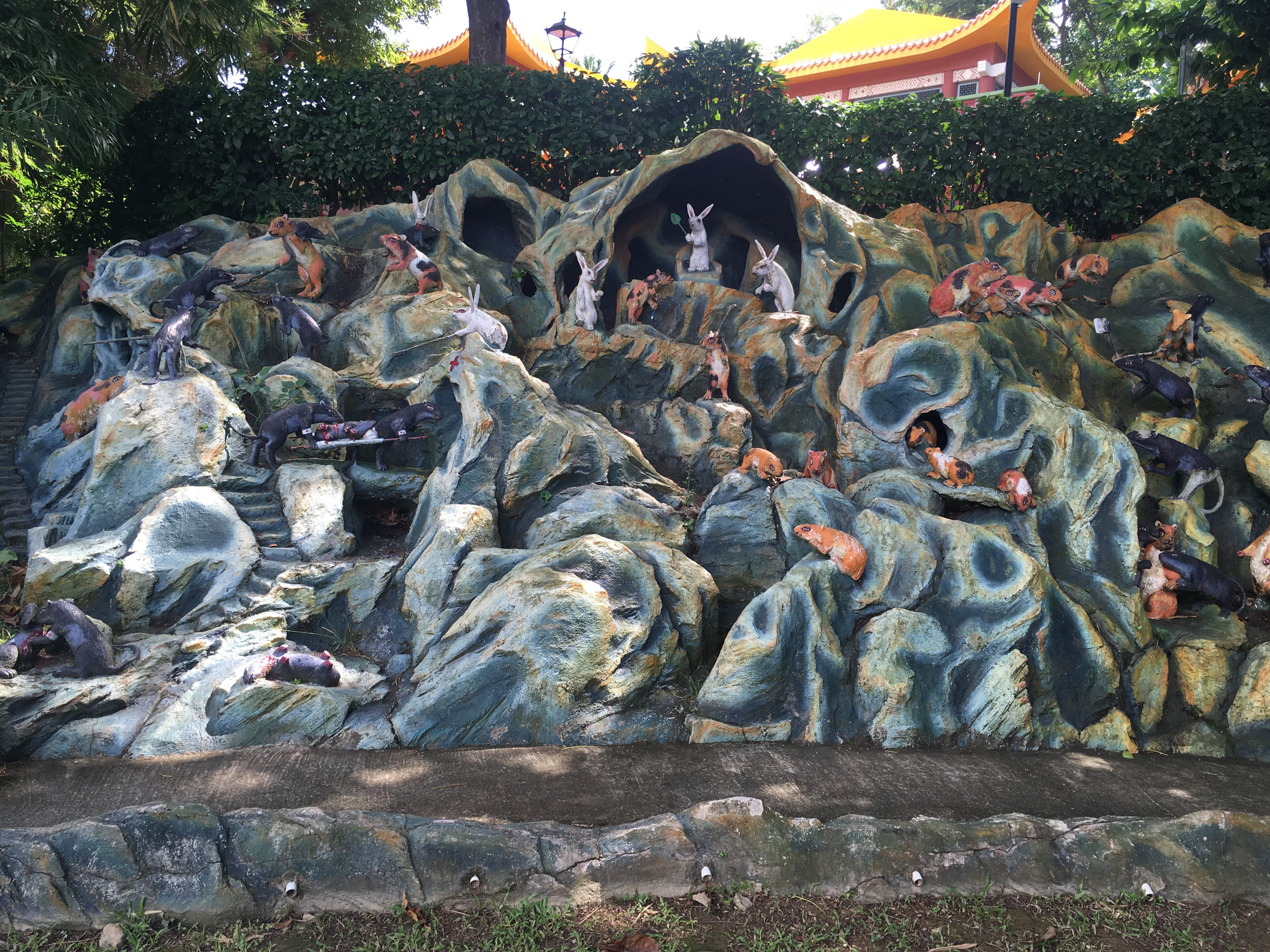 Or scenes from Chinese legends, some recognisable, some less so (even to people in the relevant culture; Malay Chinese friends I’ve asked have struggled to explain some of these).

(this one’s from Journey to the West: Pigsy at his most terrifying)

(According to the plaque, this one depicts the Seven Lucky Gods doing battle with Neptune, who must have wandered in from some other mythological canon) 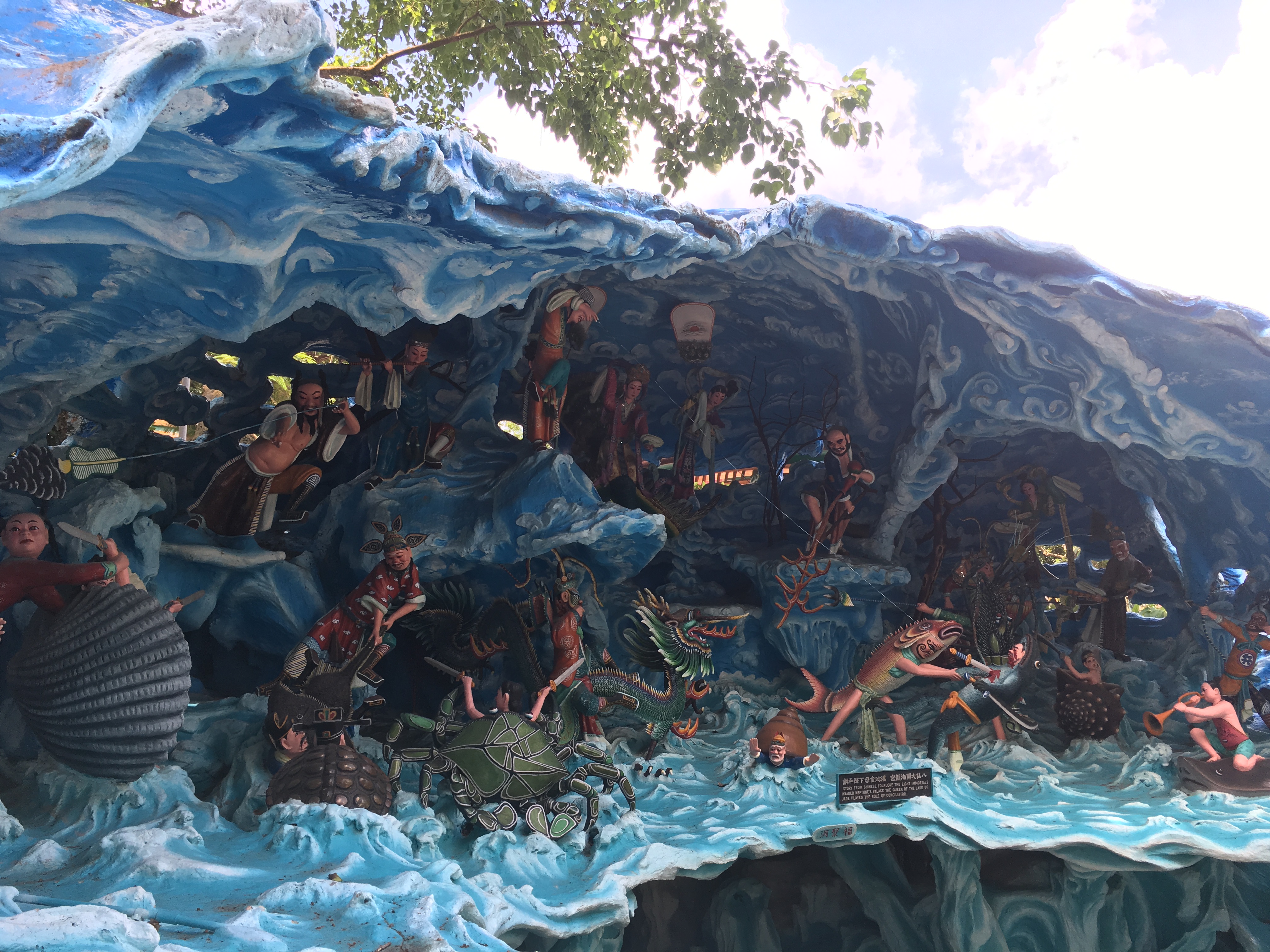 Then there’s the anthropomorphic animals, similarly ranging from the cute to the disturbing: 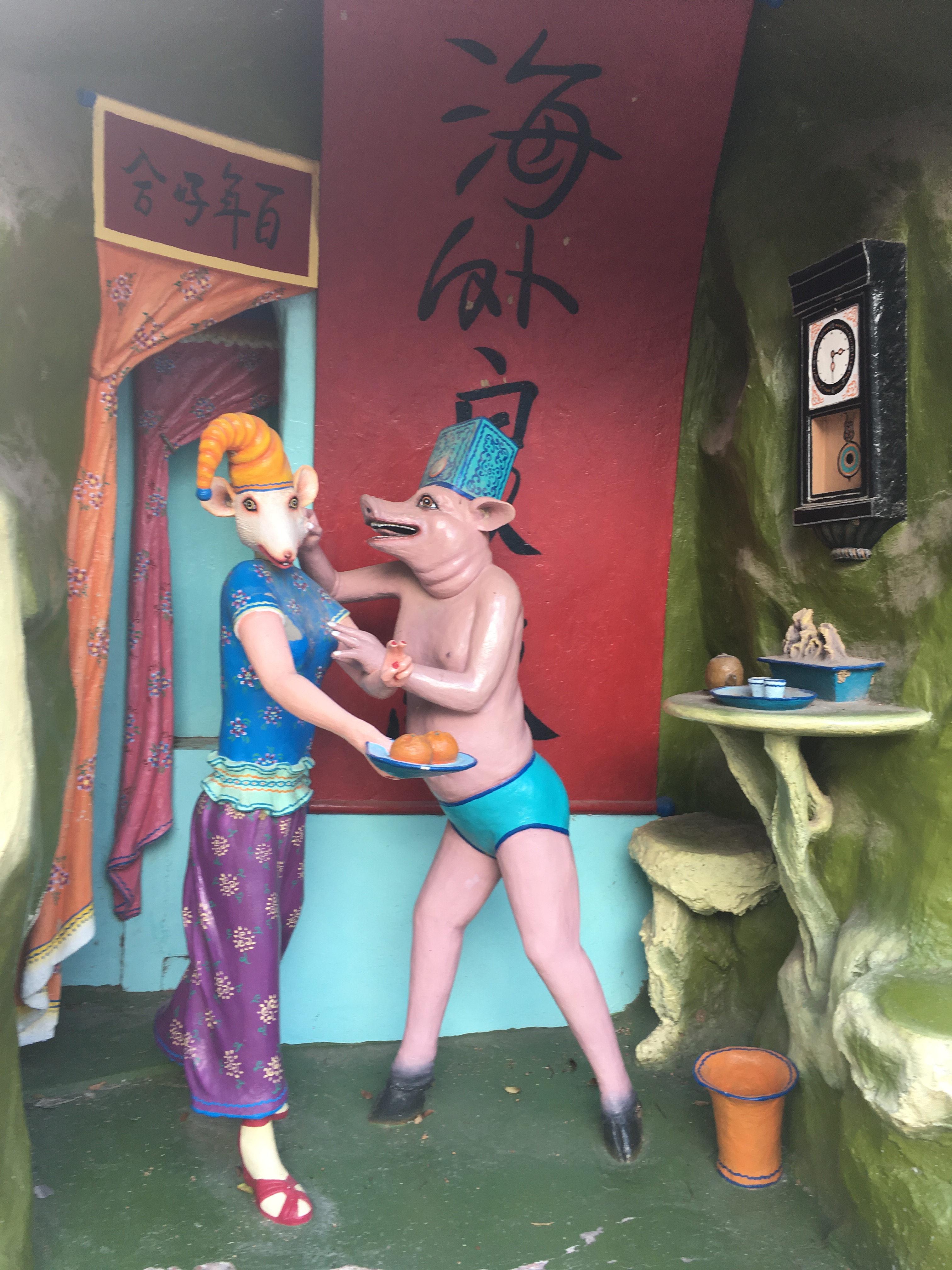 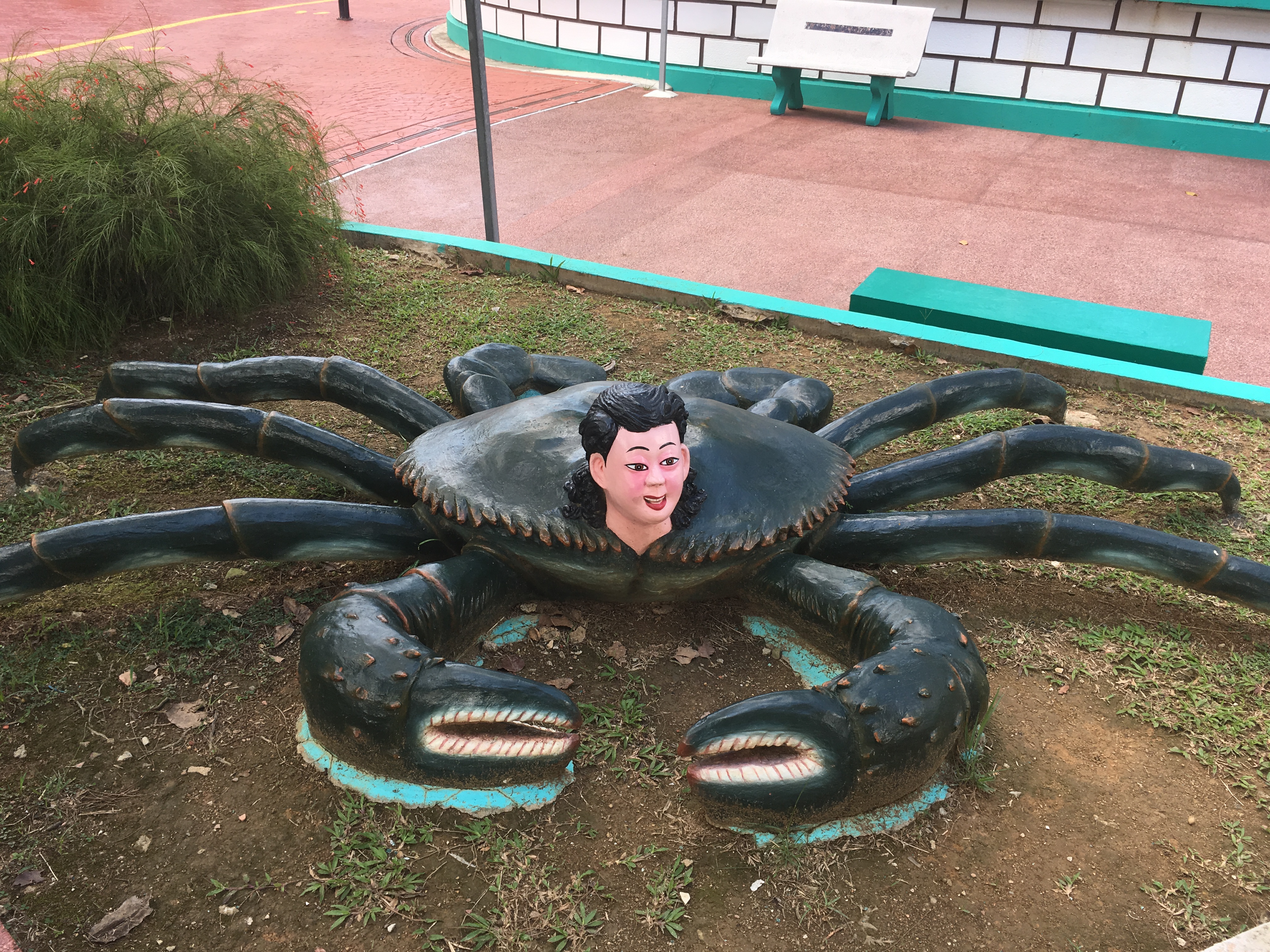 There are also more conventionally represented animals, albeit, one suspects, rendered by a sculptor who’s never actually seen one:

Along with some really quite beautiful gods and heroes 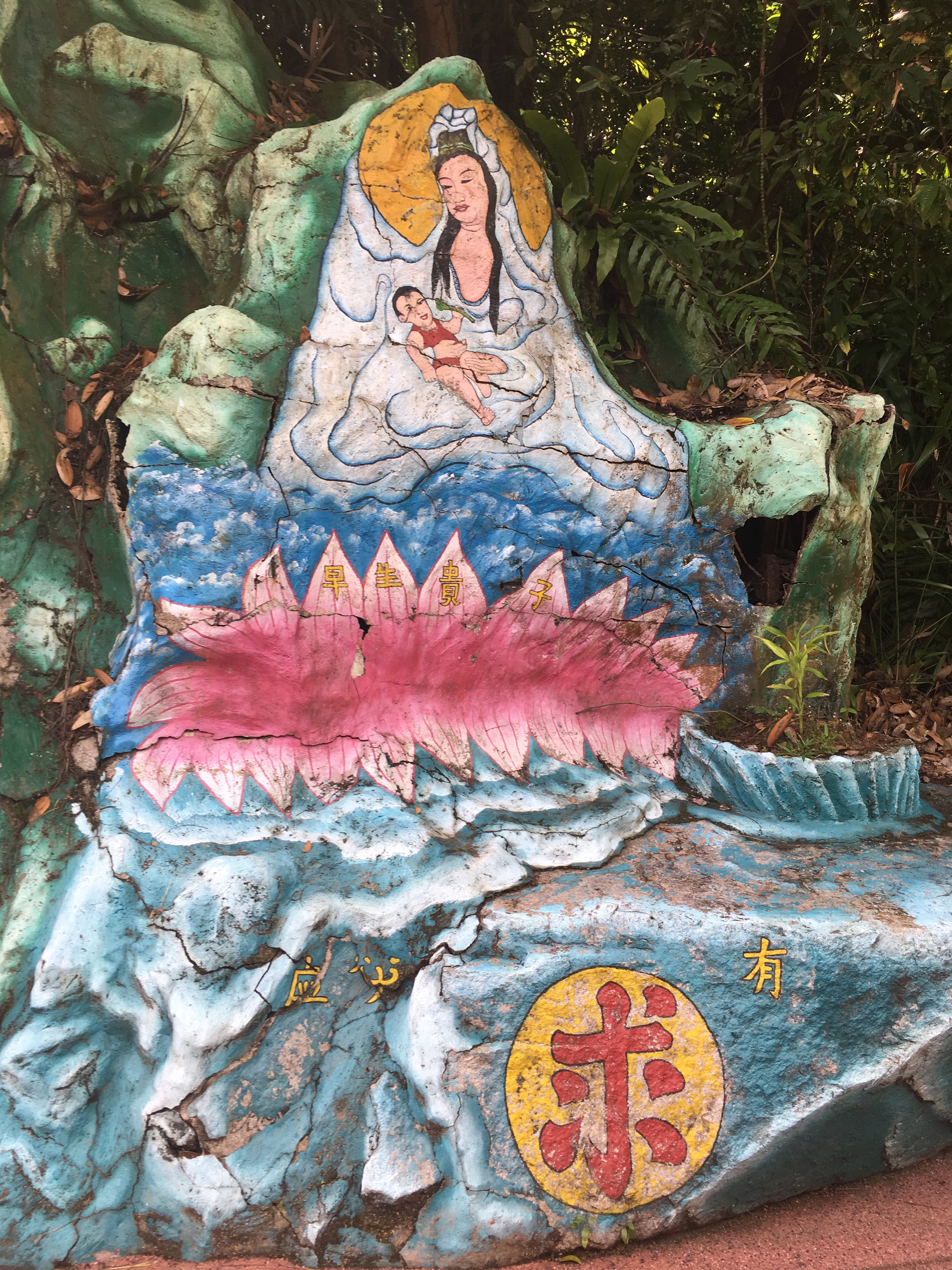 And, finally, you can take a trip round the monuments of the world!

If you’re in Singapore and want to visit for yourself, here’s a map. There’s way more than I could put in a single blog post, so do go see it.